The true eternal does exist here.

Eternal Fighter Zero is a doujin-soft (Self published) fighting game developed by Twilight Frontier, who also developed other games such as Higurashi Daybreak, Grief Syndrome (A Beat-Em-Up based on Puella Magi Madoka Magica), and the official Touhou fighting games, such as Immaterial and Missing Power, or Scarlet Weather Rhapsody. The game features several characters from diverse visual novels by Key/Visual Arts, (And tactics, before Key split off from them), such as ONE ~ To The Radiant Season and Kanon. Subsequent revisions added characters from MOON, but the second revision, named Eternal Fighter Zero: Blue Sky Edition, added characters from AIR, for a grand total of 23 selectable characters.

Gameplay is based on several other fighting games such as Street Fighter, The King of Fighters or Guilty Gear The game is notorious for its huge amount of in-jokes and references to the original visual novels, as well as other fighting games, as the characters take some of their move, or even their whole fighting styles, from those games. The game has a large cast, but, aside of the final boss Kanna, the characters are all well balanced, as tier lists don't really make much of an impact as with other games.

The game features Misuzu Kamio, Kano Kirishima and Minagi Tohno as playable characters, but it's notorious for also featuring Kannabi-no-Mikoto as the final boss, however, due to her playable version being the same as the boss version, so she remains banned from tournaments. 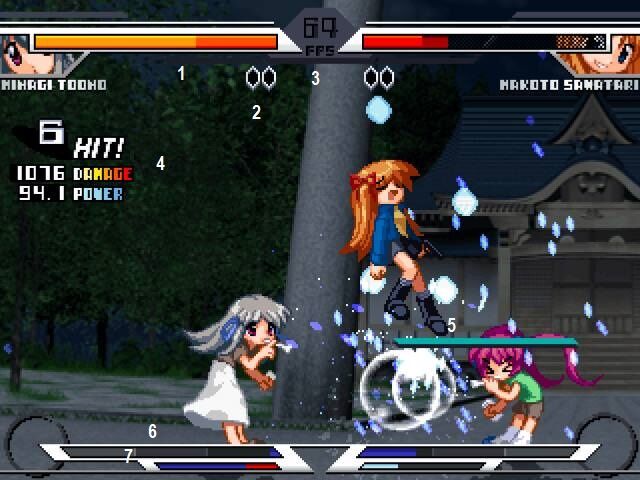 1. Life Gauge: Displays the remaining amount of life for each character. Each character begins with 10000 life. The darker part represents the zone where the character can use their Final Memory. When one character's life gauge is depleted, the opponent wins the round.

2. Win Count: Displays the number of rounds won. Once a character reached the maximum amount required, she wins the match.

3. FPS: Displays the frames per second. Usually varies between 60 and 64.

5. Juggle Meter: Also known as "Stun Meter", it displays the amount of recovery time before the player can regain control of the character. During that time, she's open for her opponent to extend the combo.

6. Special Gauge: Displays the character's SP. he number beside the gauge and the color represent the number of SP levels available for the characters, which allows them to perform super moves called "Eternity Specials". The maximum amount of SP levels is 3.

Misuzu is the main heroine of AIR, and the first girl Yukito meets: Misuzu is a strong, yet tricky character who fights with several traps, poisons and her crow partner Sora. Her normal moves are good, and her traps are useful to catch unprepared opponents off-guard.

One of the heroines of AIR and Misuzu's classmate and friend, Kano is a slow, but well-ranged fighter who can use elemental magic in battle to keep her opponents at bay. Her magic staff gives her an incredible range even without magic, and her Super bar refills automatically without attacking her opponent. Due to her range and powers, Kano is best suited for keep-away game.

One of the heroines of AIR and Misuzu's classmate: Minagi is a fair character who fights alongside her best friend Michiru. Minagi can command Michiru to attack from any spot of the screen, forcing her opponent to keep an eye on Minagi, and other on Michiru.

Kanna is an extremely fast and powerful character who uses her divine powers to crush her opponents. She serves as the true final boss of the game (Debuting in Eternal Fighter Zero: Blue Sky Edition). Due to her playable version not being changed at all from her boss version, she's completely unbalanced and inherently stronger than any other character. Because of this, she's banned from EFZ tournaments.

Not even Kanna is match for Mai's speed