Haruko Kamio (神尾 晴子, Kamio Haruko?) is a supporting character in Air. She is the aunt and foster mother of Misuzu Kamio.

Haruko is a drunken, noisy and outgoing woman who often insults or pressures Yukito Kunisaki and she is easily annoyed.

However, she shows a kind, caring and gentle side towards the end of the series.

Haruko is Misuzu Kamio's eccentric foster mother who is actually her aunt, but Misuzu was given to her by Keisuke Tachibana after Ikuko Tachibana died. Because of this, she doesn't want to get close to Misuzu in case Misuzu is taken away from her. Also, she prevents Misuzu having outbursts when she gets close to someone.

Haruko's occupation is unknown as when Yukito Kunisaki asked Misuzu Kamio replied "it's a secret", but since Haruko wears a suit-like outfit and ties her hair up when going to work, it indicates that she works in an office. 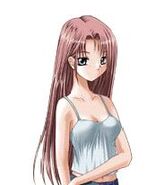 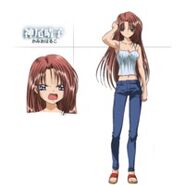