Mother never lies! So, if I don't do it well, that will make her a liar! Mother! Mother!

Kannabi-no-Mikoto is a character in Air.

Kanna is an exceptionally beautiful light-skinned girl of high school age with flowing purple/blue hair that she ties in the front with red ribbons with two bells at the ends and blue eyes. She is usually seen wearing a large pink kimono and a light tan/green kimono when she escaped from the shrine. She also has a set of white wings, which she usually keeps hidden to look like an ordinary girl.

Kannabi no Mikoto (or simply Kanna) was the last of the winged race. At the age of 16, she escaped the shrine with Ryūya and Uraha to visit Yao Bikuni (Kanna's mother) who is locked in her prison in the mountain which resided in Reizan Territory. Along the way, she was drawn close to Ryuuya, who she treated as a guard earlier. Uraha taught her how to juggle, and Kanna, practicing and failing to catch the beanbags, became a running joke throughout the episodes and the mini series called Air in Summer.

When Kanna, Uraha and Ryūya finally got to the prison, they saw Yao Bikuni (Kanna's mother) locked in cage. Ryuya used his sword to get her out, and when Kanna went to hug her, Kanna's mother told her not to touch her because her body was cursed. They escaped, but didn't get far. Kanna's mother was shot with an arrow. While saying her last words, she told Kanna a special prayer, a code among the winged beings. After that she asked how Kanna was and Kanna told her the story of their trip. Uraha then told Kanna to show her mother her juggling act, and Kanna tried, and failed. While her mother praised her, Kanna believed it was bad, and kept trying. While practicing, her mother told Ryuya that once she died, he was not to touch her, and leave her as she was. With that, she died. However, Ryuya ignored her words, and removed the arrow after Kanna's mother had passed, resulting for him to be cursed too, which was found out later. The same goes for Kanna, who cried on her mother's body, resulting in her inheriting the curse of the Winged Ones.

After the death of Yao Bikuni (Kanna's mother), they continued their way. Kanna asked Ryūya and Uraha if they had any wishes. They told Kanna a lot about the ocean and how great life they would have if they lived by the sea. Kanna knew that the warriors were near, so after kissing Ryuuya, she used her wings to protect her friends. When she was flying in the sky, the monks put a curse on her just like they did to her mother. Kanna was shot by arrows while flying then caught by the curse and disappeared.

Kanna appears as the Final Boss, and playable character, in the doujin fighting game Eternal Fighter Zero by Twilight Frontier. She's an extremely fast and powerful character who uses her divine powers to crush her opponents. She serves as the True Final Boss of the game (Debuting in Eternal Fighter Zero: Blue Sky Edition, and relocating Unknown as a Sub Boss). Due to her playable version (Debuting in Eternal Fighter Zero -Memorial-) not being different at all from her boss version (Unlike Unknown), She's completely unbalanced and is inherently stronger than any other character. Because of this, she's banned from EFZ tournaments. 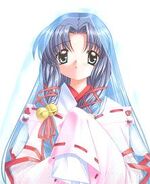 Kanna in the visual novel.

Kanna in the anime.
Community content is available under CC-BY-SA unless otherwise noted.
Advertisement