Hey! Have you ever wished you could do magic?

Kano is Misuzu's classmate and becomes an acquaintance of hers in the anime. Her sister, Hijiri Kirishima, is a doctor and has a clinic which she inherited from their parents; their mother died when Kano was a baby and their father a few years later. Kano is very distinguishable because of the yellow bandanna tied on her wrist. A stray dog named Potato follows her around often and is almost a pet to her. When Kano was younger, Hijiri brought her to a festival and they wandered into a shrine. When they entered the shrine, Kano's attention was caught by a white feather and she reached for it, and with Hijiri's help, she took the feather.

However, after that incident, Kano was possessed by the spirit of Shiraho, a mother from the ancient times whose child had to be executed as a sacrifice. Not wanting others to lay hands on her child, she decides to kill him herself but finds that she could not do it, and in her sorrow she kills herself. This leads Kano in the modern day to suffer a strange "illness" that she's told is simply anemia and scattered amnesia.

Since Kano became possessed, she sometimes sleepwalks or faints. When she is possessed, she also affects a faint glow, mumbles things that Shiraho said when she was alive, and re-enacts the last moments of Shiraho's life, often attempting to strangle other people or cut or stab herself. Kano cannot remember anything she does while possessed.

Hijiri becomes a doctor as she wants to find a cure for Kano, but with no success. When Hijiri found blood and a knife, she feared for Kano's safety and tied a yellow bandanna on her wrist, hoping to use it as a trigger to bring Kano back to herself. She told Kano that it was a charm that would give her magical powers if she didn't remove it until she became an adult, so that Kano would never remove it.

In her own route and the anime, Kano sleepwalked again and went to the same shrine that she went during the festival when she was younger. Yukito tries to stop her, but she strangles Yukito while in her sleeping state. Kano was returned to normal after Yukito places the white feather she took when she was younger on her chest, and the spirit leaves her. The feather was thought to be from Kanna's wings when it is revealed that it has supernatural powers.

Kano is a friendly, outgoing girl who has short blue hair and green eyes. She wears a yellow bandanna on her wrist.

Kano appears as a playable character in the doujin fighting game Eternal Fighter Zero by Twilight frontier. She's a slow, but well-ranged fighter, and can use elemental magic to keep her opponent at bay. Her magic staff gives her an incredible range even without magic, and her Super bar refills automatically without attacking her opponent. Due to her range and powers, Kano is well suited for keep-away game. 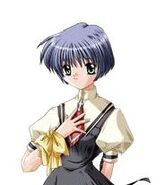 Kano in the visual novel.

Kano in the anime.

Screenshot from the visual novel.

Screenshot from the anime.
Community content is available under CC-BY-SA unless otherwise noted.
Advertisement