A dream that goes on forever will just turn into a sad one.

Michiru (みちる, Michiru?) is a supporting character in Air.

Michiru is like a younger sister to Minagi. When she and Yukito first met, they were like oil and water. As they both stayed with Minagi, they became close to each other.

After Minagi's mother regains her memories, it is discovered that Minagi's mother was planning to name her miscarried child Michiru. It is then revealed that Michiru was a wandering spirit who decided to help a lonely girl on Earth after seeing the trapped Winged Maiden. Michiru explains that she became a physical manifestation of Minagi's unborn sister to help her through her troubles, and now that Minagi is happy and has made other friends, she is no longer needed. Michiru then vanishes.

When Minagi gets home, she receives a letter from her father explaining that his wife has given birth to a baby girl. When Minagi visits him, she discovers the baby is named, and looks exactly like, Michiru. 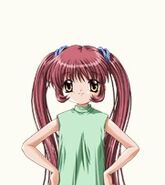 Michiru in the visual novel.

Michiru in the anime.

Screenshot from the visual novel.
Community content is available under CC-BY-SA unless otherwise noted.
Advertisement