Is there any purpose to wings that can't fly faster than me ?

As she was closer to her father when she was younger, her mother was always alone. Minagi has an unborn little sister whose name was Michiru.

When her mother had a miscarriage with Michiru, she could not take the blow and started living in her dreams, thinking Minagi as her unborn sister Michiru.

Minagi is a shy, quiet girl, who loves astronomy. She is tall, which she is proud of, because it means she is closer to the sky. She has gray/dark brown hair with blue bows at the side, and reddish-pink eyes.

Her mother had a dream that causes her to face reality, but it has also caused her to forget about Minagi. Minagi, unable to return home, runs away and lives with Yukito in the train station.

Later on, she was helped by Yukito Kunisaki to return home and her mother accepts the truth and faces reality followed by Michiru's disappearance. Eventually, Michiru revealed that she was not real and she actually could have been Minagi's sister and visited Minagi's mother.

After the visit, Michiru disappears again and she found standing at the edge of a building by Minagi and Yukito. She bids farewell to Minagi, saying her job is done.

She is then asked by her father to visit him and see her half-sister also named Michiru and also looks like a younger version of her lost friend Michiru.

Minagi appears as a playable character in the doujin fighting game Eternal Fighter Zero  by Twilight Frontier. She's a fair character who fights alongside her best friend Michiru. Minagi can command Michiru to attack from any spot of the screen, forcing the opponent to keep an eye on Minagi, and other on Michiru. 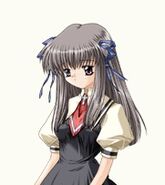 Minagi in the visual novel.

Screenshot from the visual novel.

Screenshot from the anime.

Minagi Screenshot from the anime

Minagi Tohno reading a book. Screenshot from the anime
Community content is available under CC-BY-SA unless otherwise noted.
Advertisement