Isn't that a romantic thought? That your true self is in the sky!

Misuzu is a beautiful and cute-looking girl with extremely long blonde hair that always tied in a ponytail (Haruko Kamio has cut Misuzu's hair up to her shoulder in Episode 11) and deep blue eyes like the shade of the sky.

Misuzu is a innocent and lively girl who is slightly clumsy as she trips over a lot. Misuzu says "Gao" whenever she is troubled or about to cry which causes her aunt hates it, so Haruko Kamio asks Yukito Kunisaki if he can manage to make her stop doing it. She has always loved dinosaurs thinking, when she was younger, that chicks would grow into them.

Misuzu is the reincarnation of Kannabi-no-Mikoto, but she is seen as a typical girl just like everybody else, albeit somewhat immature for her age. She is very lonely because each time she becomes close to someone, she starts to cry. It's later shown that her crying is caused by sad dreams Kanna has in the sky. On top of that, when she becomes close to someone, they'll both soon become sick and die because of a curse inherited from Kanna's mother.

She is the first girl Yukito Kunisaki encounters where she meets him while going to the beach as he was sleeping on the shore. After hearing he was hungry she invites him to eat at her house. After talking to him for a while, she hears from him that he has no place to sleep so invites him to stay at her house. At first Haruko refuses, but then she relents. They soon become friends and later they fall in love with each other.

Ikuko Tachibana passed away when Misuzu was little and Keisuke Tachibana didn't want to keep her because she wasn't normal and he was unable to properly deal with it, so he gave her to his wife's sister- Haruko Kamio. Haruko at first isn't sure about it either, but she adopts Misuzu after realizing that she has come to love her as a daughter later on and cannot lie to herself about her feelings anymore.

After meeting Yukito, Misuzu starts to have dreams about the sky and traveling in past. After seeing her last dream, she and Haruko were heading to the beach. Misuzu walks by herself towards her goal, which was her mother. Upon reaching her, she passes away.

Misuzu appears as a playable character in the doujin fighting game Eternal Fighter Zero by Twilight Frontier. She's a strong, yet tricky character who fights with several traps, poisons and her crow partner Sora. Her normal moves are good and her traps are useful to catch unprepared opponents off-guard. 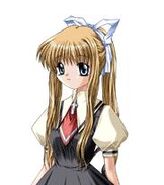 A screenshot of Misuzu with Yukito Kunisaki in the visual novel.

A screenshot of Misuzu in the anime. 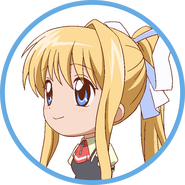 An icon of Misuzu in Kaginado.

A screenshot of Misuzu in Kaginado Revealed PV.

A screenshot of Misuzu in Kaginado Revealed PV.
Community content is available under CC-BY-SA unless otherwise noted.
Advertisement