Potato is a character in Air.

Potato is a stray dog that lives in town who follows Kano around often. His only word is "piko". Yukito met Potato when the latter stole the former's puppet one day; this is also how he met Kano. Potato has also been helpful in finding Kano when she goes into a daze and wanders around the town at night.

Potato is a fluffy little dog with black eyes and white fur. He is cheeky, and aggravates Yukito often. 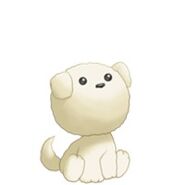 Potato in the visual novel.

Potato in the anime. 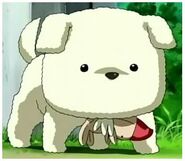 Screenshot from the anime.
Community content is available under CC-BY-SA unless otherwise noted.
Advertisement