Yukito Kunisaki is the main character in Air.

Yukito is a wanderer traveling across the country in order to find the 'girl in the sky', a goal each generation of his family has passed on for a thousand years. Yukito lives off his trade, a special form of string-less puppeteering that was taught to him by his mother before she died. He is a successor and descendant of Ryūya and Uraha, and is implied to be Ryūya's reincarnation.

It is implied that when Sora appears in the anime after Yukito's disappearance, Sora is Yukito or contains a part of Yukito's soul.

Yukito was abandoned by his mother at a shrine at an early age, and was mostly raised by monks. When his mother returned, she taught him the art of Houjutsu and told him the story about the girl in the sky, then asked him to follow her on her journey. She died soon after and Yukito decided to continue the journey.

The history of Yukito is not very clear, but it is believed that he's the reincarnation of Ryuya since both share very similar traits, like same hair and eye color, as well as their personality.

Yukito is short-tempered and gets annoyed easily, usually with Misuzu. He is tall, has grey hair and golden eyes. He wears a loose black shirt and jeans.

Yukito makes an appearance in the doujin fighting game Eternal Fighter Zero... as an assist character to Misuzu: She can store special feathers after spending one level of Super, after that, the next time she summons Sora, the crow materializes as Yukito, who have a few options to help Misuzu in battle: He can, for example, pour juice in front of the opponent to stun her, leaving her wide open to start, or extend a combo, he can also use Kano's puppydog Potato as a projectile by kicking him; or he can uppercut Misuzu's opponent, useful on wake-up. 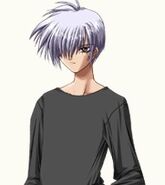 Yukito as seen in the visual novel.

Yukito as seen in the anime.
Add a photo to this gallery
Retrieved from "https://air.fandom.com/wiki/Yukito_Kunisaki?oldid=6526"
Community content is available under CC-BY-SA unless otherwise noted.